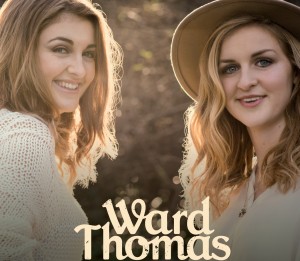 WARD THOMAS
Debut Album ‘From Where We Stand’ Out Now

Following the recent Radio 2 A list for single ‘Push For The Stride’, BBC Breakfast News interview and features in the Sunday Times Culture, The Times and The Independent, Ward Thomas debut album ‘From Where We Stand’ went to No.1 in both the OCC Country Chart and iTunes Country Chart

With the sounds of Country music permeating in the UK after the success here of the hit television series ‘Nashville’, people both within and outside the music business have been asking – where are Britain’s home-grown Country stars? Ward Thomas may well be providing some of the answers. They are on the threshold of becoming one of the first genuine major British Country acts.

Ward Thomas are 20-year old twin sisters Catherine and Lizzy Ward Thomas from Hampshire. Whilst in sixth form, a rough demo of the Ward Thomas track “Footnotes” found its way into the hands of two respected Nashville session musicians, leading to the recording of a debut album ‘From Where We Stand’ (out 21st July) that could spearhead a UK Country sound.

Hampshire and Country music may not be obvious bed fellows but these girls, brought up on a rural live stock farm from a family line that included artists and authors, have had Country music in their blood ever since they were introduced to the music of Carrie Underwood, Johnny Cash, Dixie Chicks and Alison Krauss by a cousin in their early teens. “We fell hard for Country”, as Catherine puts it. One listen to the vocal cadences and close harmonies on their debut album ‘From Where We Stand’ and Nashville and Hampshire suddenly don’t seem all that far apart.

Written in its entirety in the UK, without the help of A-list song writers, yet recorded in Nashville with some of Country Music’s finest including Bobby Blazier, Dan Dugmore and Chris Rodriquez, ‘From Where We Stand’ retains a certain Englishness which combined with the ‘Nashville’ production gives us Ward Thomas’ own individual UK take on Country music. Their authentic Country sound with British influences and stories has been embraced in Nashville and   the debut album can boast guest appearances from Grammy Award winner Michael Omartian (who appears on the track “Take That Train”) and Country Music superstar Vince Gill, winner of 18 CMA awards and 20 Grammys (who plays on “Town Called Ugley”).

Lead single ‘Push For The Stride’, (follow up to their Radio 2 playlisted Footnotes EP), opens with strident guitars, melodic piano and vibrant harmonies. It’s an uplifting, uptempo country-pop tune with a serious message about going after your dreams. The album contains a range of moods and textures – from heartfelt and exquisitely sung ballads like ‘Try’ and ‘From Where I Stand’ which was written about their parents’ divorce to barnstormers like ‘Way Back When’, ‘Town Called Ugley’ and ‘Push For the Stride’. Dan Dugmore’s swirling pedal steel supports the lilting melody of ‘Footnotes’, and Chris Rodriguez’s playful, chiming guitar and Blazier’s propulsive drumming balance the twins’ ardent vocals on another highlight, ‘Guest List’, which features one of many catchy choruses that will keep the listener hooked.

In the spring of 2014, Ward Thomas released their ‘Footnotes EP’ with lead single ‘The Good And The Right’ making it onto the BBC Radio 2 Playlist. Terry Wogan interviewed the twins on his popular Radio 2 show and they were also featured in a special Radio 2 documentary on country music broadcast in March. That same month they appeared at the Country2Country Festival at London’s O2 Arena where they were interviewed by BBC London News. More recently they have been featured in the Sunday Times Culture and have been confirmed to appear at the Maverick Festival in early July.