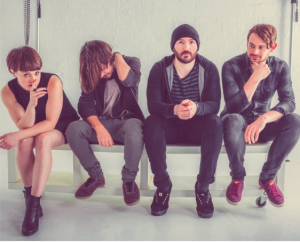 London-based noir alt. rock fourpiece Hawk, have been described as everything from noir-rock to alternative-folk. Based in London, Julie, Matt, Chris, and Sam hail from various corners of the UK and Ireland. Their sound was described by Subba Cultcha as a “fusion of ambience and power” fronted by a “soaring, crackling vocal”. Irish-born lead singer Julie Hawk initially embarked on a solo folk career, and began collaborating with Matt in 2012. After a year on the acoustic circuit, the pair gained support from the likes of Steve Lamacq and Tom Robinson. The fledgling duo then joined Sam and Chris to form the band you hear now, adding a new abrasive edge to their sound while retaining the delicacy of their acoustic roots.